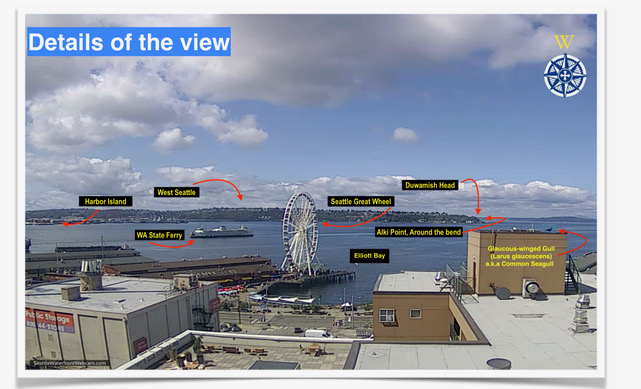 The Seattle Waterfront Webcam (SWW) began life as the Puget Sound Cam on April 1, 2009. The original camera was linked to the Northwest Wining and Dining website and had 10,486 discrete views before it clocked its last image in December 2017.

Much like NASA’s Cassini spacecraft, which operated heroically for 20 years and far exceeded its original mission and expected duration, the Puget Sound Cam enjoyed a remarkably long and colorful run. This inexpensive piece of equipment was rudimentary by today’s standards, capable of taking still shots only when it was “tripped” by outside movements.

Reborn with state-of-the-art equipment and a new name to better define its line of vision and purpose, the Seattle Waterfront Webcam is now linked to its own distinct URL and website.

On April 11, 2018, the latest version of the Seattle Waterfront Webcam began live-streaming images of the traffic flowing across the Alaskan Way Viaduct (part of Washington State Route 99, a.k.a., Highway 99). This major artery, which ran north to south through downtown Seattle for 66 years, was leveled in 2019 due to structural problems and potential earthquake dangers. It was exciting to watch as the demolition crews dismantled the old viaduct piece by piece (no explosives were allowed)! For additional details and photos of the demolition process, please check out Viaduct Memories.

With the Viaduct demolished, the east side and western edge of Seattle were connected or the first time in close to 70 years! The cleared land mass and open vistas that were created will eventually be transformed into a new Waterfront Park perfect for strolling the storefronts and restaurants, jogging and biking, and taking in unobstructed views of the singular beauty of the Pacific Northwest.

The webcam also documents the activity in Seattle’s Elliott Bay, which is part of Puget Sound. Through an intricate set of waterways, this “inland sea” runs about 50 miles to the Washington coast and the Pacific Ocean.

By logging onto the Seattle Waterfront Webcam you can watch Washington State ferries (the largest ferry system in the world!) wend their way toward Bainbridge Island and Bremerton. Giant ocean-going cargo ships, their rectangular containers piled like colorful building blocks, also ply the Sound under the careful direction of skillful harbor pilots navigating squat tugboats.

West Seattle hovers across the Bay. The camera points to the northern tip of Duwamish Head. Just around the bend lies Alki Beach, the site where the original settlers of Seattle—the Denny Party—landed. They lasted one miserable, muddy winter there, then moved to the more habitable Pioneer Square to build a new city.

On those rare days when the clouds part and the sun makes an appearance, you might even spot the snow-capped peaks of the Olympic Mountain Range glistening in the distance.

Another feature of the Seattle Waterfront Webcam is the time-lapse function, which displays a one-minute, 30-second time-lapse video of previous days’ activity. To access the Time-lapse videos, click on the arrow on the left of the frame and then click on the date you would like to view.

It’s fun to watch the ferry boats zipping in and out, the Great Wheel’s unending turns, and the big cargo-container ships doing pirouettes in Elliott Bay as night gives way to day and back to night.