On Saturday, February 2, 2019, the Alaskan Way Viaduct, which had closed to automobile traffic in January, was reopened one last time so the people of Seattle could walk along its craggy surface and say goodbye.

The Seattle Waterfront Webcam owners were there documenting our 3 p.m. walk for posterity. Here are our favorite images from that very special day. The crowds were estimated at 70,000 people! 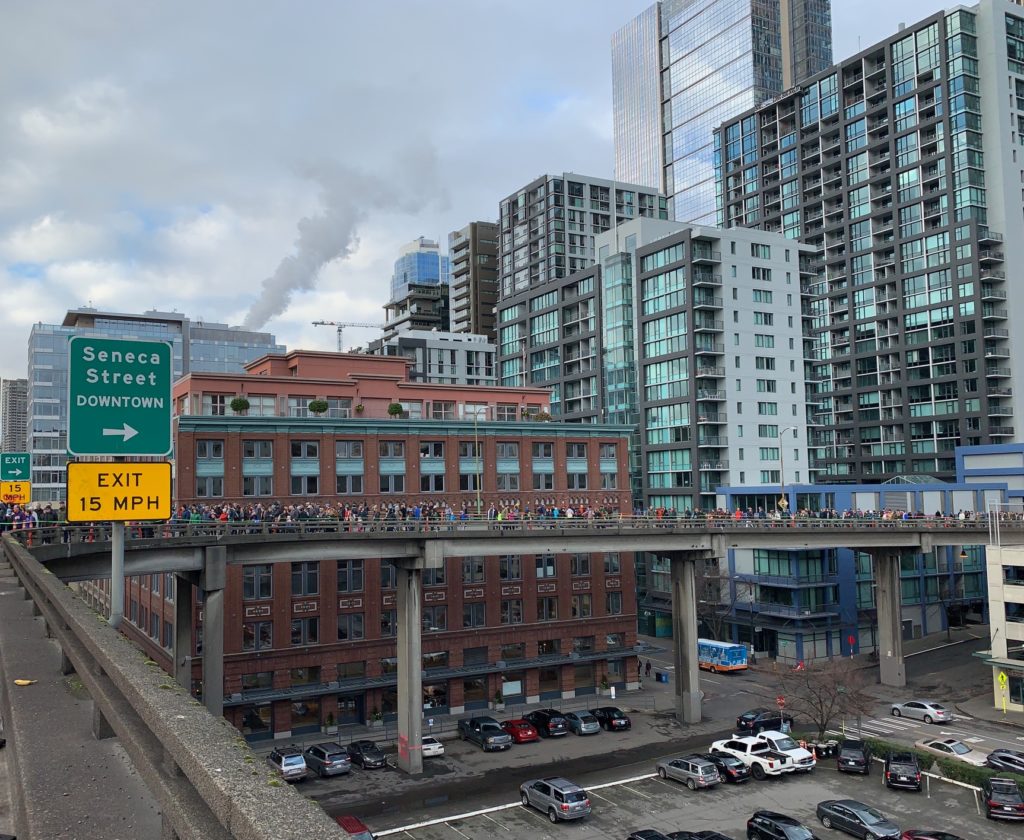 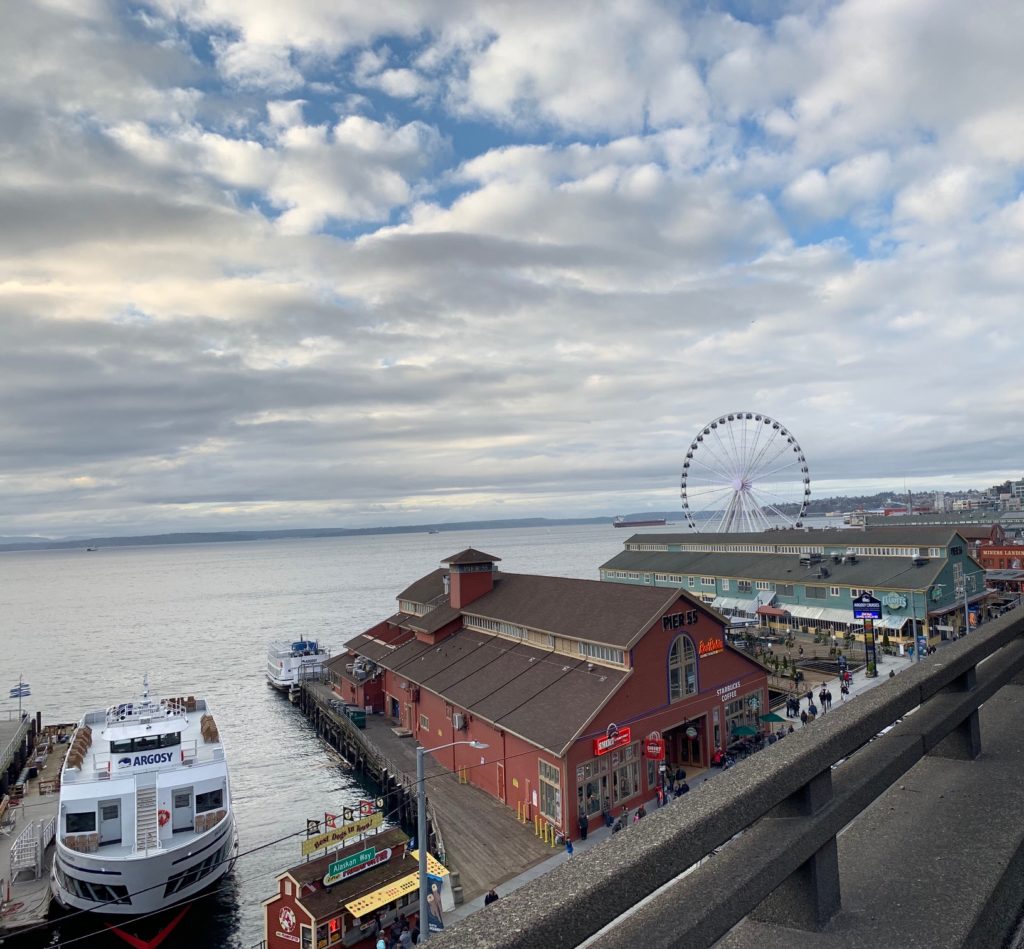 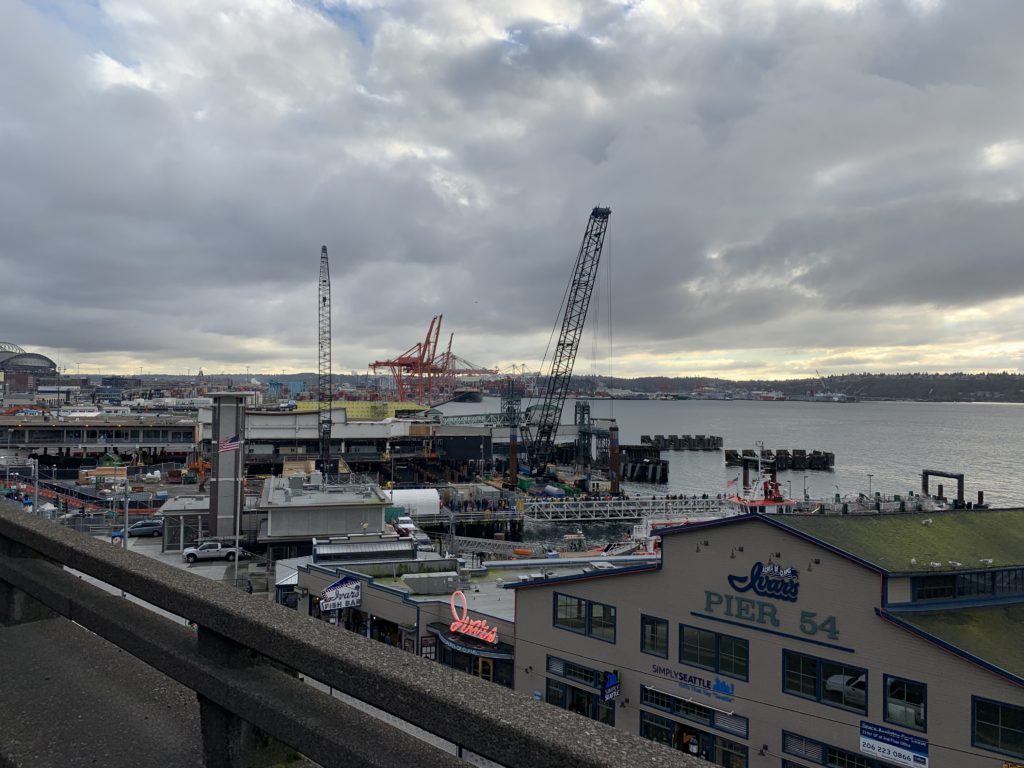 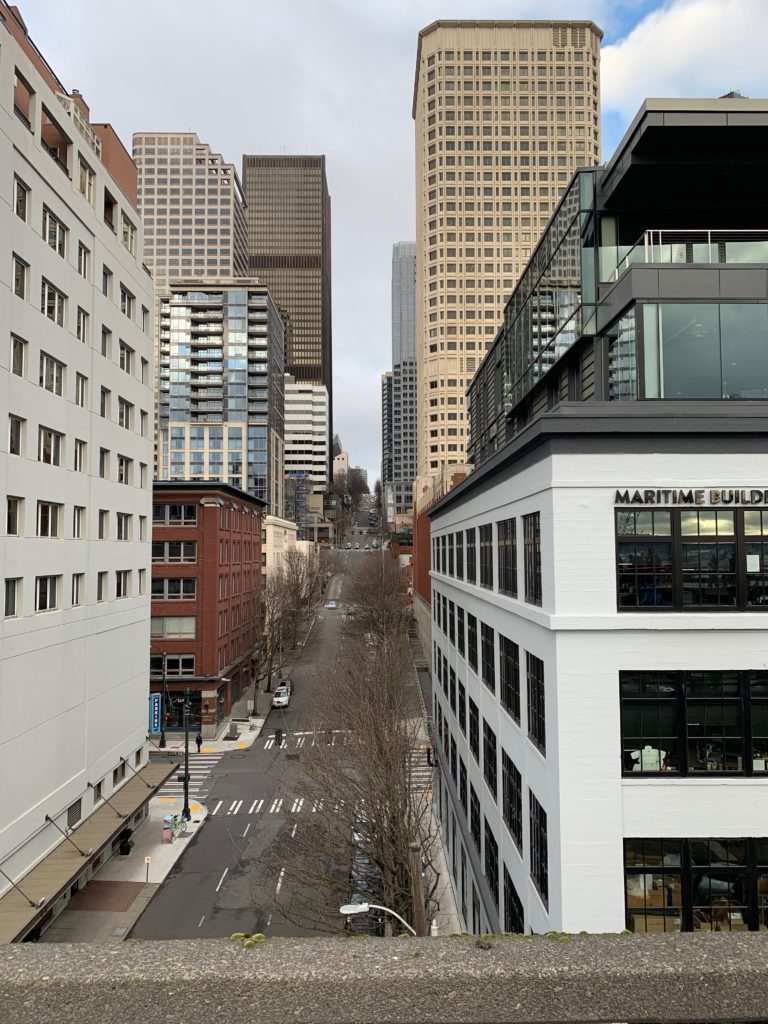 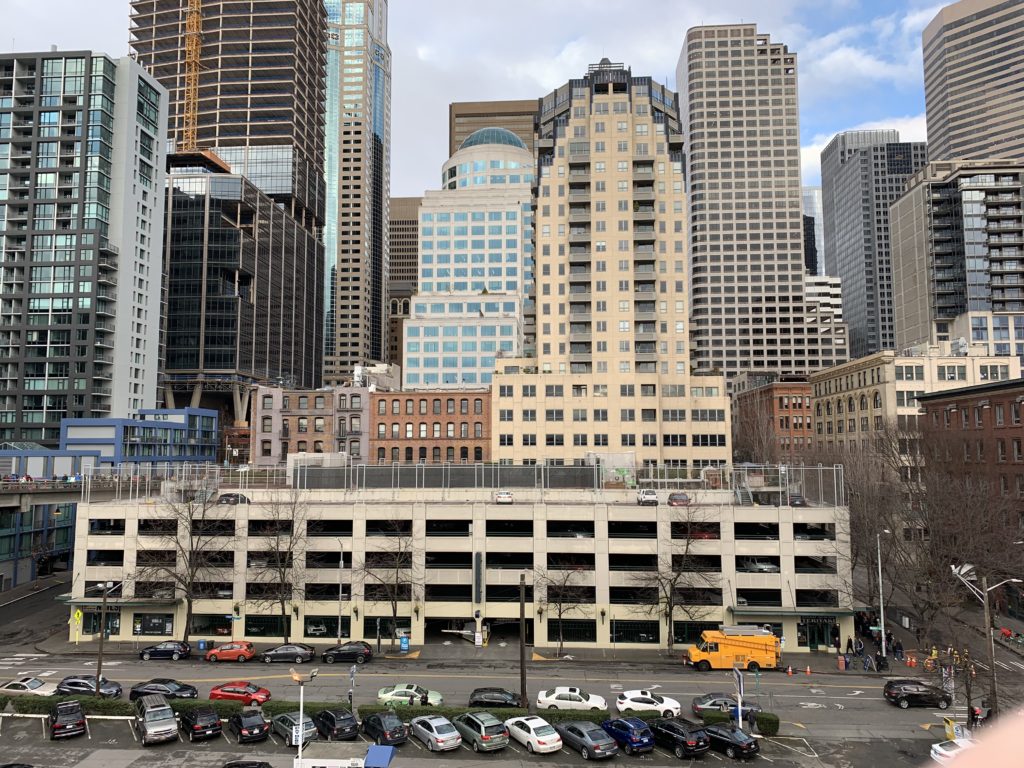 Viaduct Walk City Block View Between Spring and Seneca Streets
The following four screen shots were taken from the Seattle Waterfront Webcam Timelapse Video the day after the Viaduct Walk. Historic photos of a once-in-a-lifetime event! 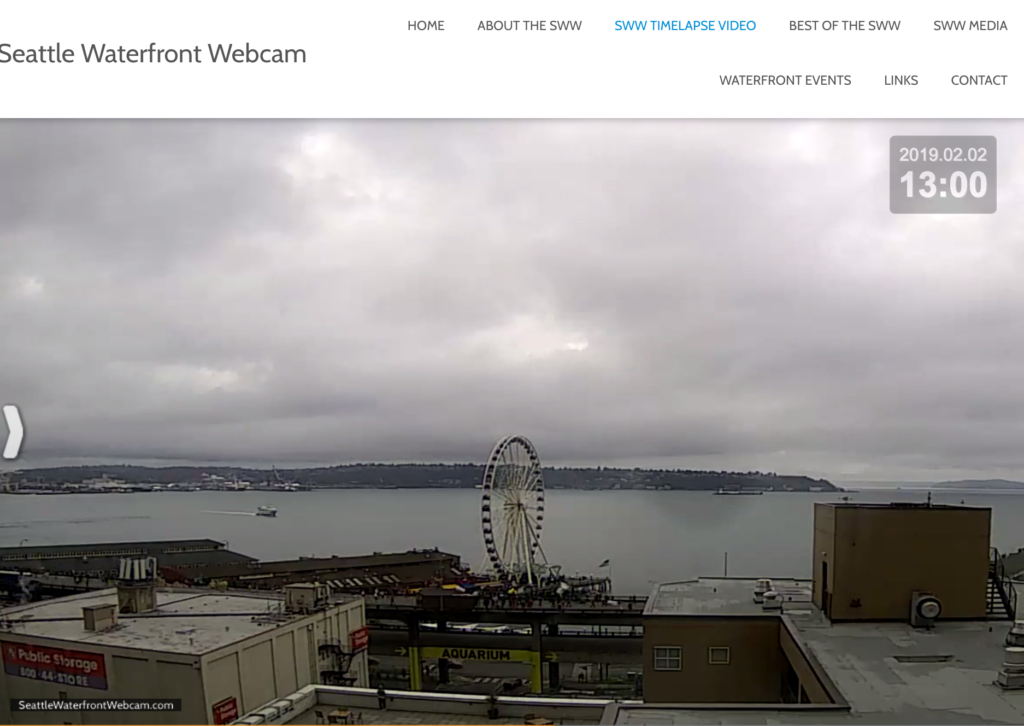 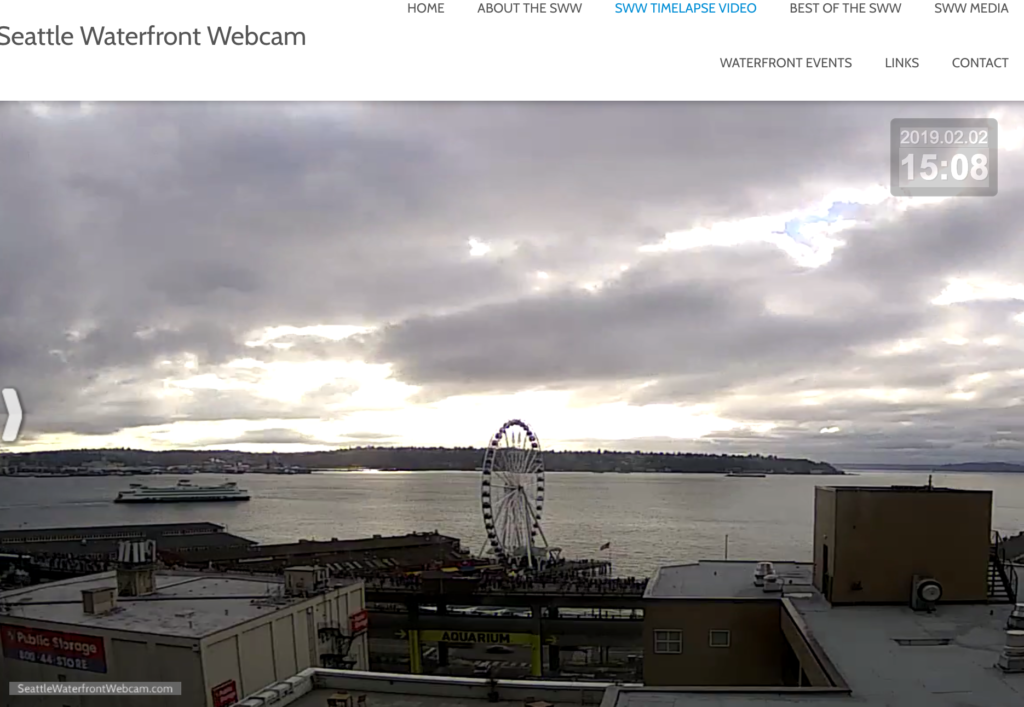 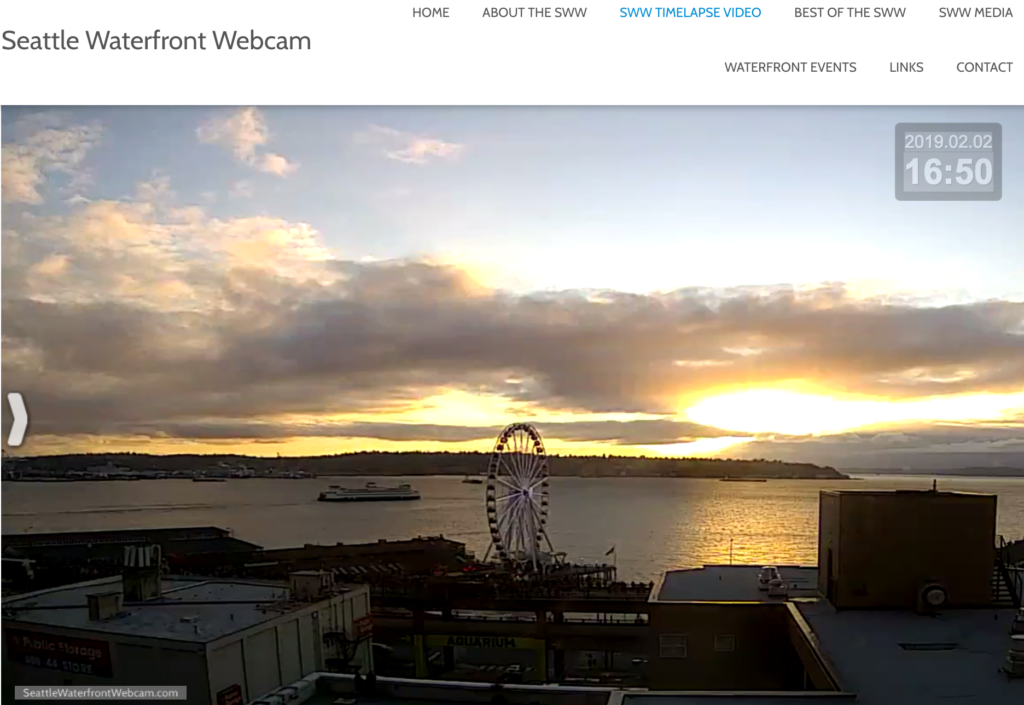 On Thursday, May 30, 2019, around 2:00 p.m., Washington State Department of Transportation crews began demolition of the Alaskan Way Viaduct at the foot of Union Street, well within the eye of the Seattle Waterfront Webcam. The crews had been working north, so May 30 was the day they finally arrived.

We had watched with great anticipation as the big crushers, bulldozers, and hose machines started working on the top deck of the Viaduct at Union Street. 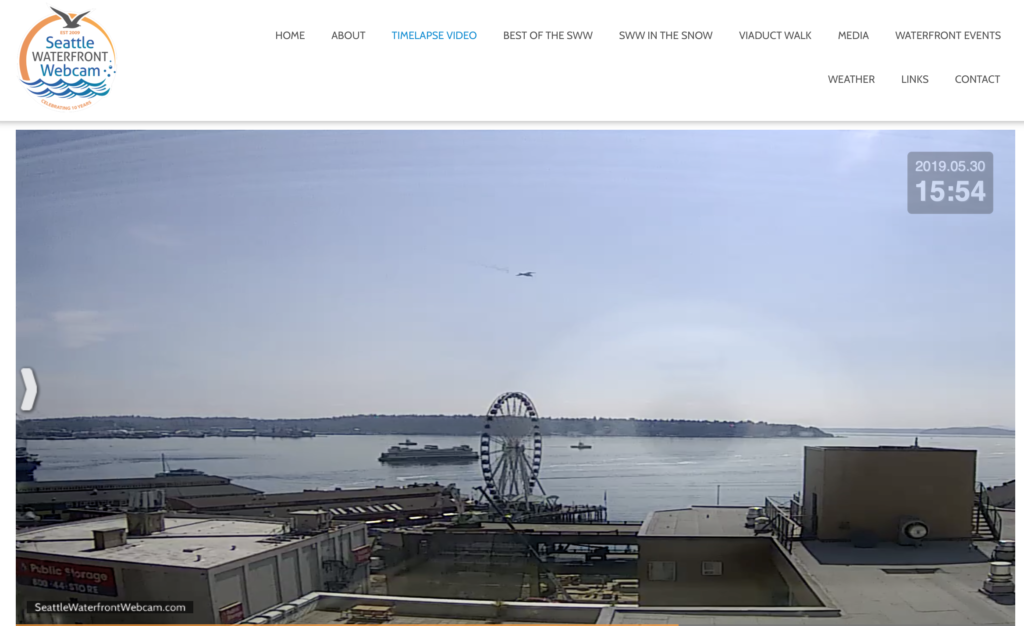 Here is a “before” photo taken on the morning of May 30, six hours before demolition at the foot of Union Street began. You can see the big AQUARIUM sign in Day-Glo green. 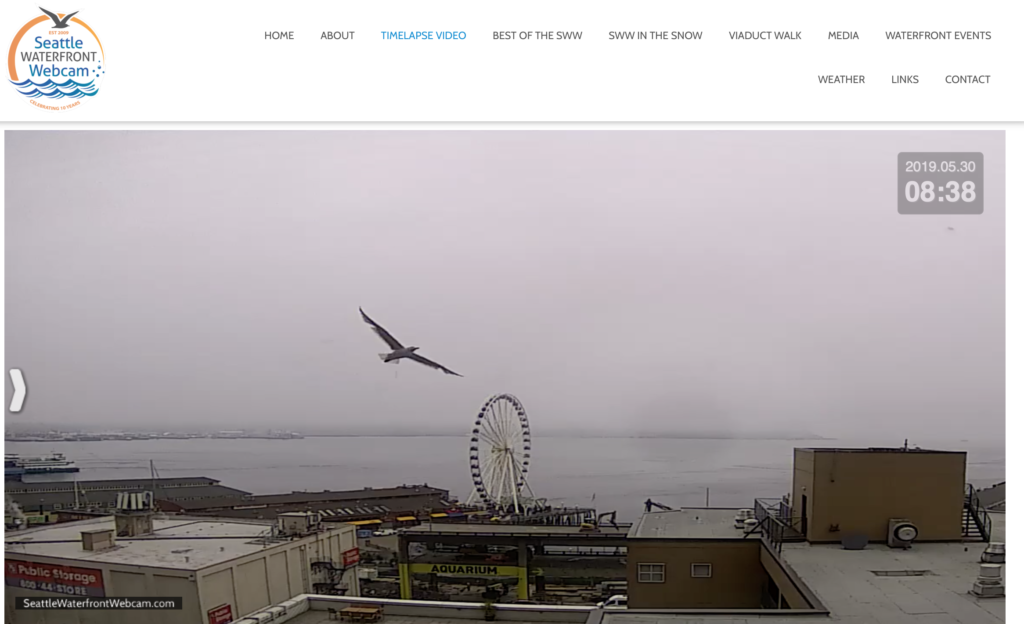 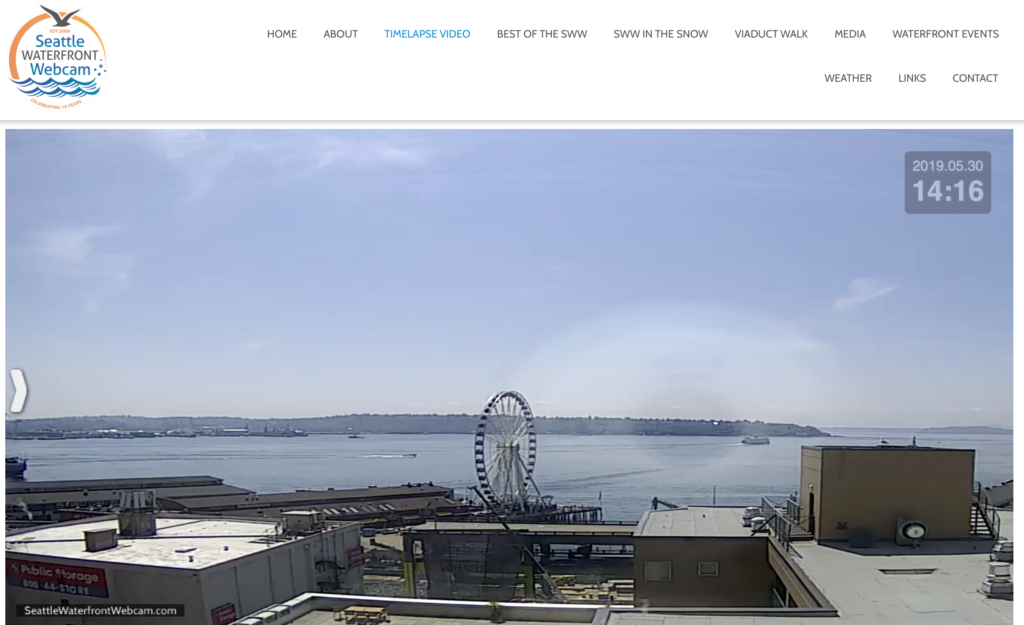 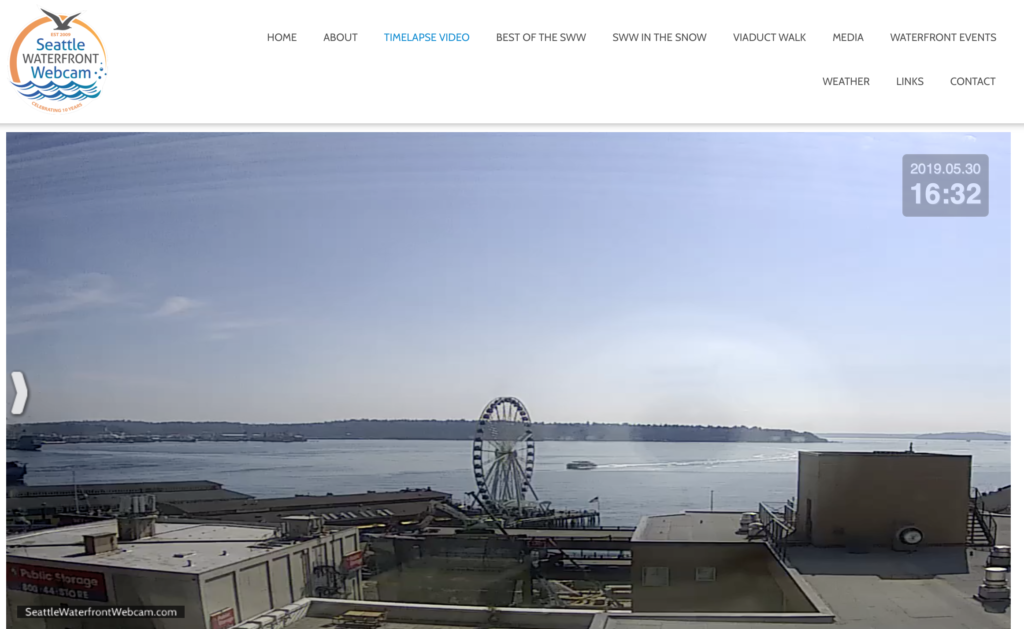 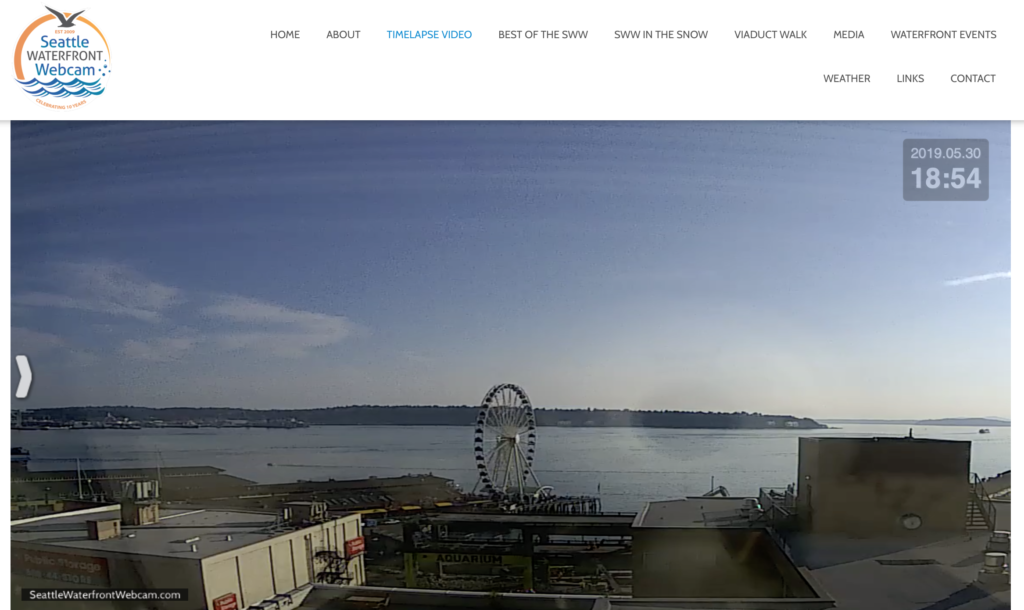 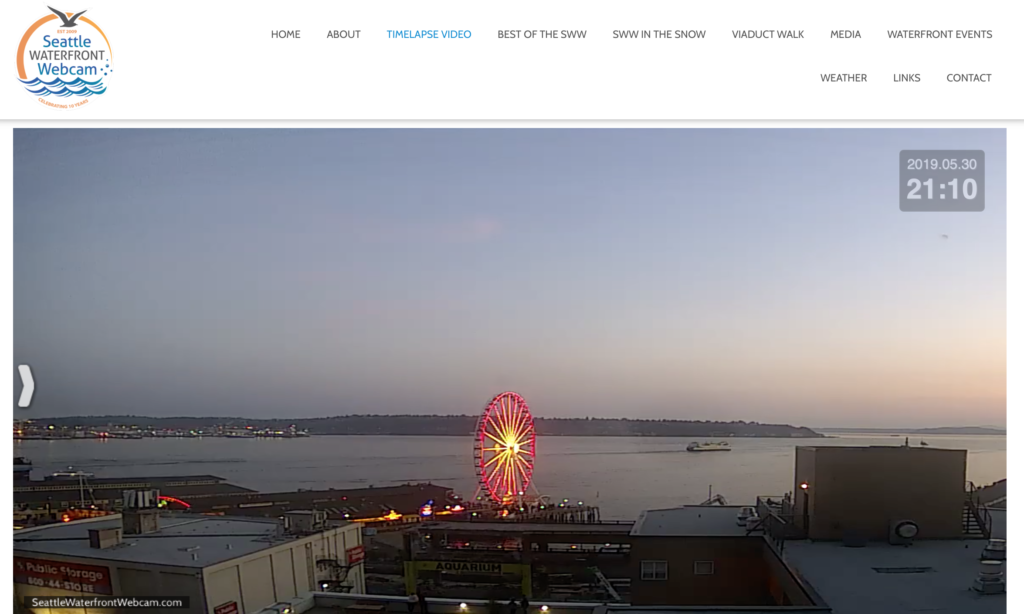 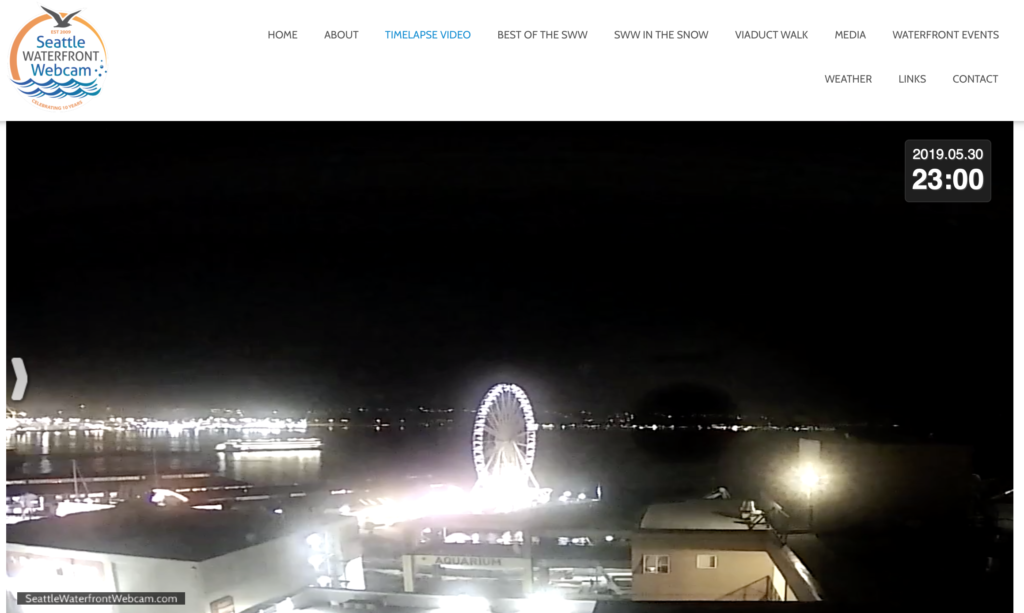 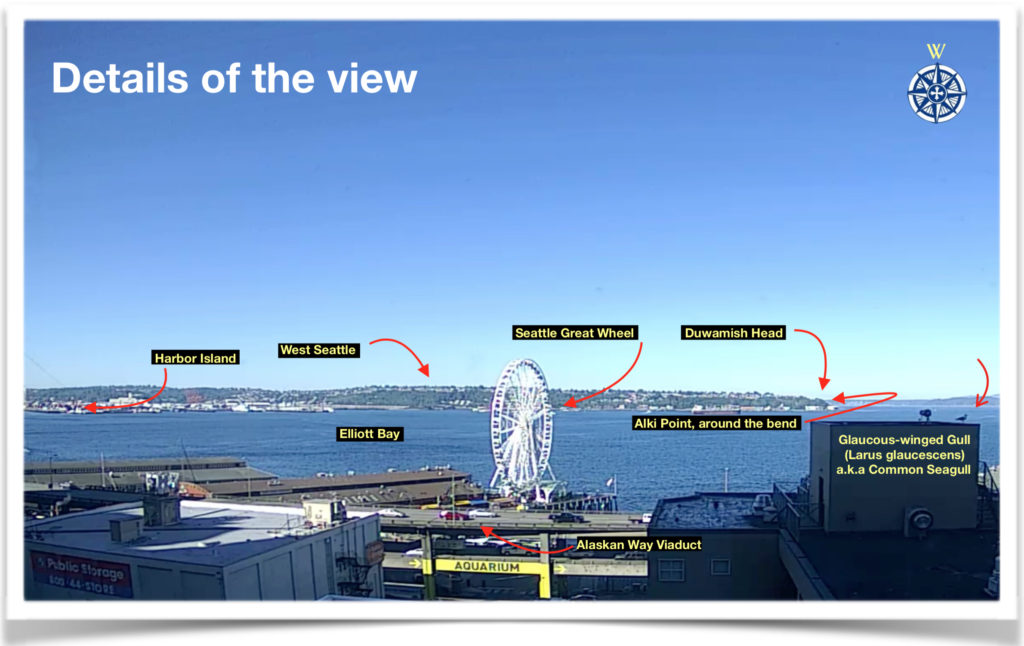 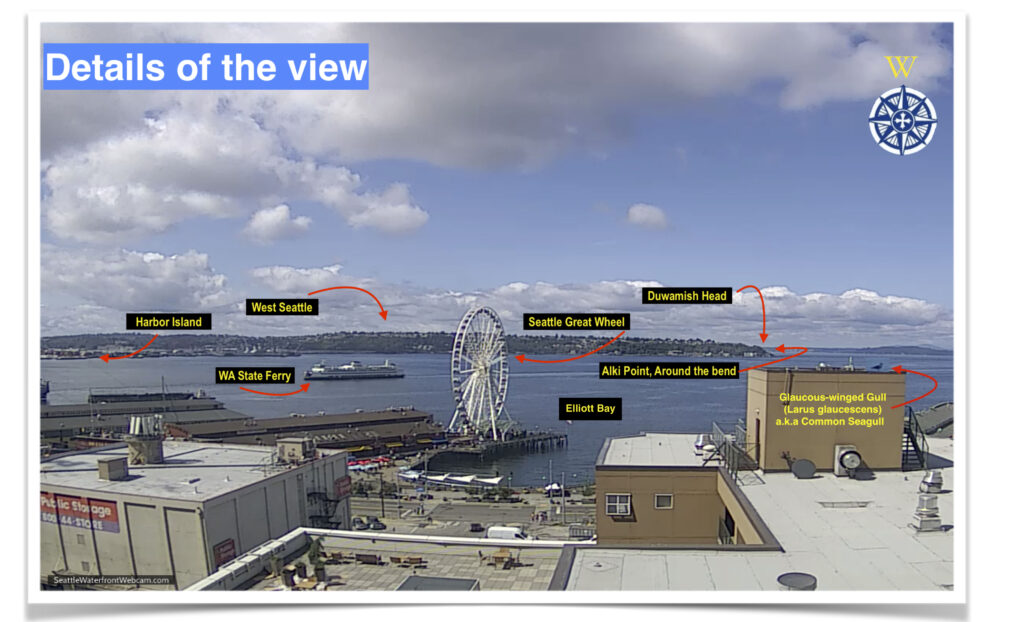 If you want to see an amazing Washington State Department of Transportation (WSDOT) time-lapse video of the demolition of the Viaduct from July 2019, click here.

In addition to watching the Alaskan Way Viaduct demolition taking place at the foot of Union Street, Spencer and I often walked down to Seneca Street to watch the take-down of the Seneca Street off-ramp. 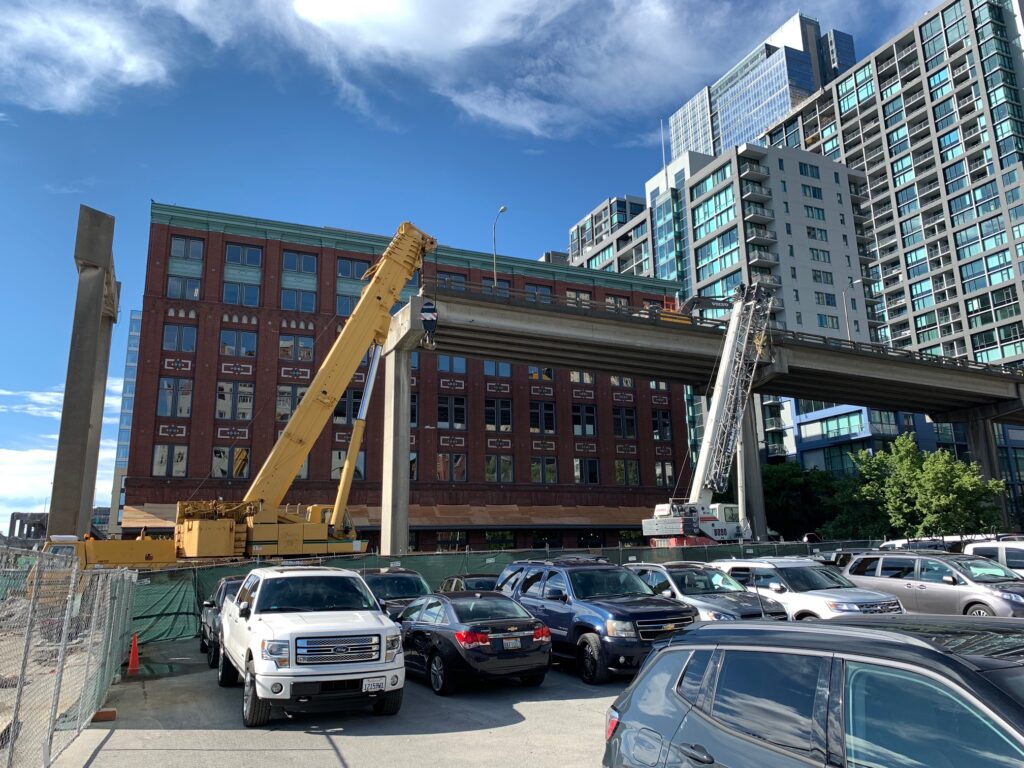 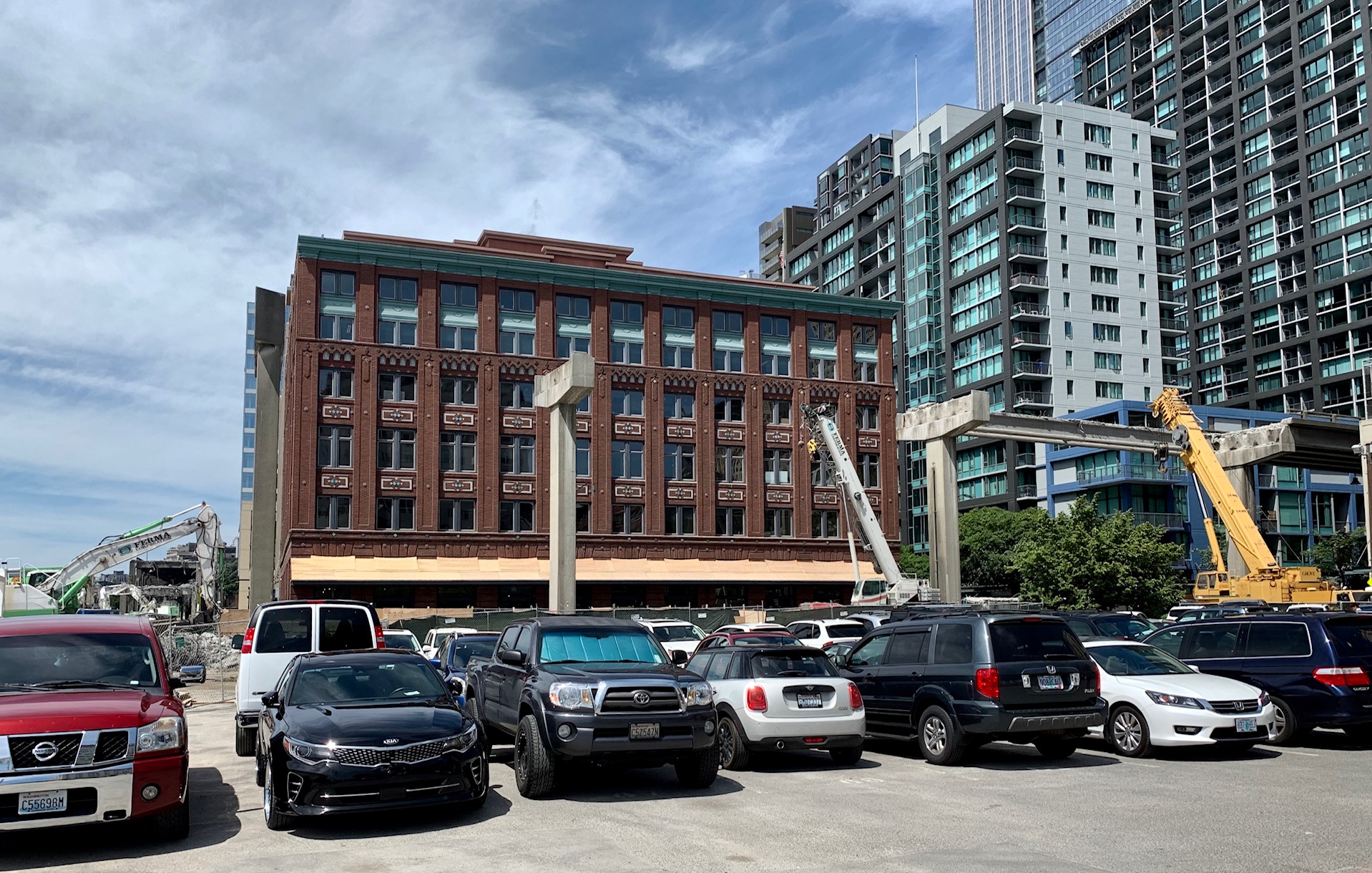 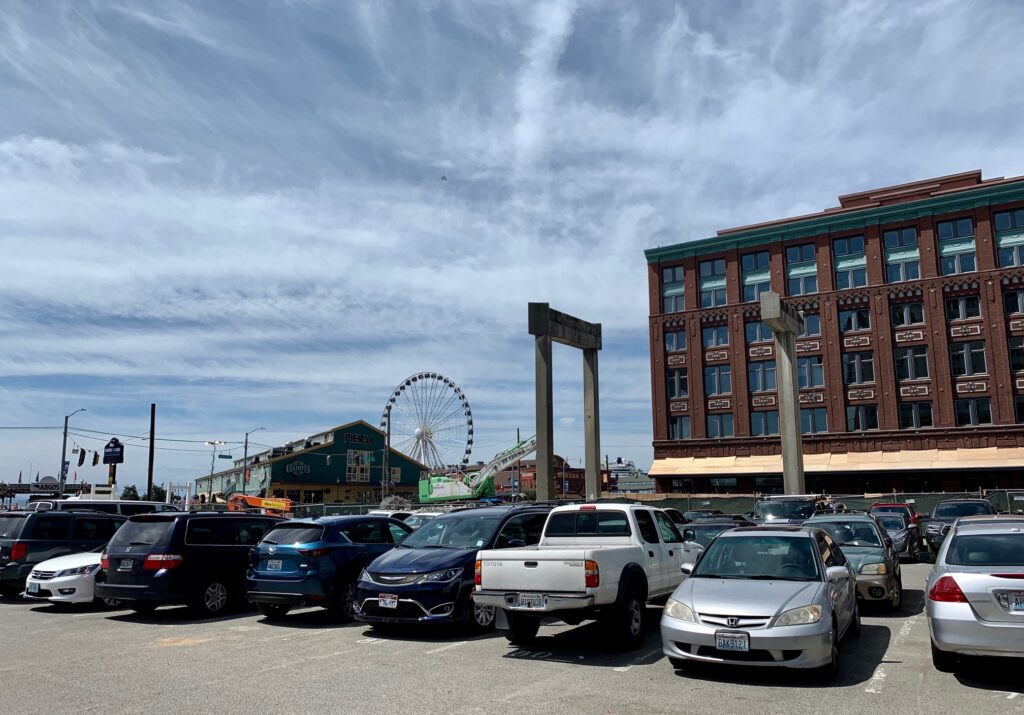 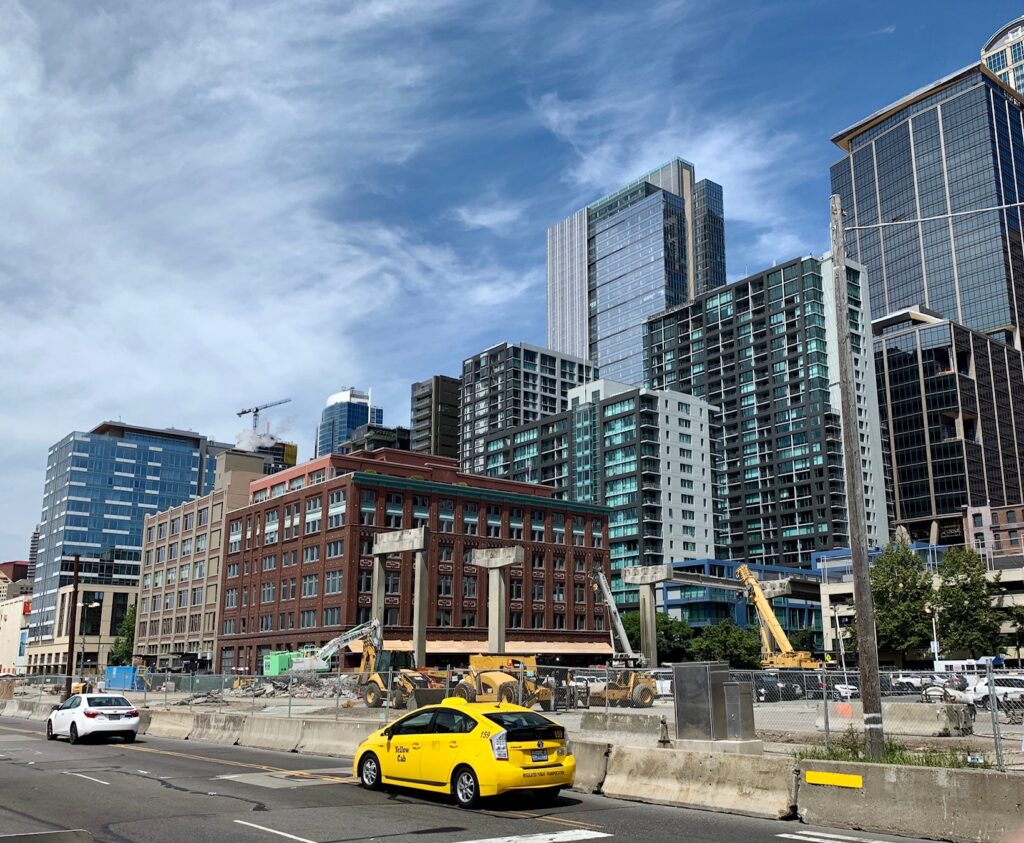 The following 10 photos show results of part of the demolition of the Seneca Street off-ramp during the Alaskan Way Viaduct demolition. We were fascinated by the big pieces of equipment that took down the giant structure as well as the resulting pieces of debris.The gnarled pieces of iron and chunks of concrete speak to the immensity and strength of the 66-year-old structure. And, if you look closely, they almost like pieces of art with their intricate patterns and varying textures.

It seems that others find beauty among the remains of the Viaduct, as several craftspeople in the Pike Place Market are making jewelry and trinkets from its pieces. Christina and Ron Sabando, owners of Sabando Design, select stone, rock, and cement, which they then polish and set as centerpieces of jewelry.

Patty Roberts (Falcorations Odyssey) uses pieces of the Viaduct to paint miniature creatures and scenes. These artisans can be found in the Pike Place Market daystalls on most weekdays.

While they are but remnants of what used to serve as a major roadway through Seattle, they are beautiful in their own singular way.

“Ruins photography refers specifically to the capture of urban decay and decline in the post-industrial zones of the world.”

If you are intrigued, you can find more examples on my Braiden Blossoms website in the category I call, “Remains.”