Once you have viewed the Seattle Waterfront Webcam, you will undoubtedly be charmed by views of Washington State ferries plying their way through Elliott Bay, The Seattle Great Wheel in all its beauteous colors, and the occasional seagull who flies in front of the eye of the cam.

Here is one of my all-time favorite shots from the cam, a gorgeous sunset photo of the Great Wheel and a departing ferry. 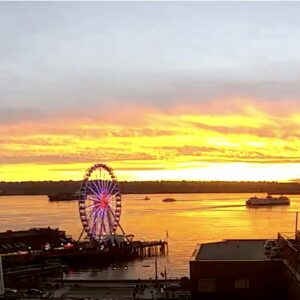 This is a more typical photo, taken from a slightly different angle overlooking Miner’s Landing as a ferry sails into the terminal under Seattle’s typically cloudy skies. 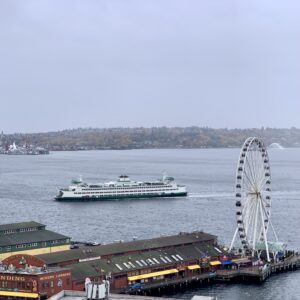 The Pike Place Market began way back in 1907 and continues to be a hub of commerce in downtown Seattle and a meeting place for people from across the globe. Here is the famous Pike Place Public Market sign and clock that mark its entrance. 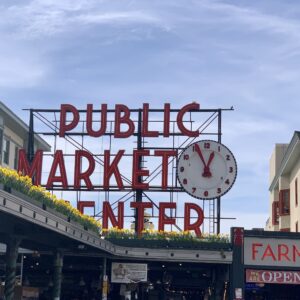 Tourists often refer to the Pike Place Market as “Pike’s Place Market,” which makes locals absolutely cringe. We refer to it as “the Market” or “the soul of Seattle.” This is another famous Market sign located in the middle of the North Arcade above City Fish Market. 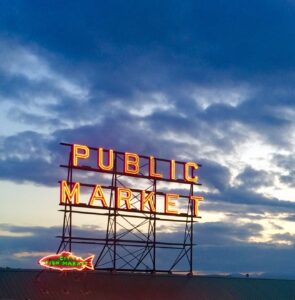 The Market is known far and wide for its tenacious flower farmers who sell the most beautiful and reasonably priced bouquets February through December. 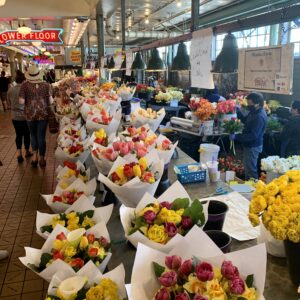 Of course, a visit to Seattle wouldn’t be complete without a stroll along the Waterfront. This shot was taken  from Pier 66 and Bell Harbor Marina, where Anthony’s Pier 66, Anthony’s Bell Street Diner, and Anthony’s Fish Bar are located. Pier 66 is also where many of the cruise ships dock. This photo looks back across Elliott Bay toward downtown, The Seattle Great Wheel, and the container terminal. 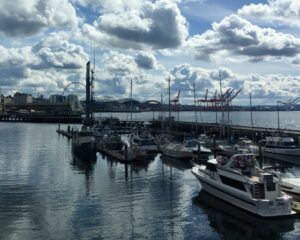 Don’t miss the Seattle Aquarium on Pier 59, where you can watch frolicking sea otters, marvel as scuba divers feed the octopi, and touch fascinating tide-pool creatures. 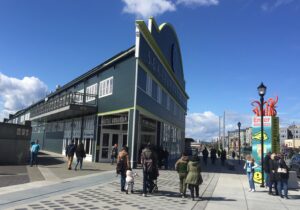 Many people like to travel north into Canada to Victoria, British Columbia, to take tea at the Empress Fairmont Hotel or stroll through The Butchart Gardens. If so, an easy way to get there is via the Victoria Clipper, a plush catamaran that offers fast-ferry service round-trip once a day from Pier 69. 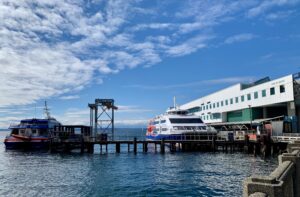 It would be easy to spend all your time exploring downtown Seattle, but then you would miss visiting some of the unique neighborhoods outside of the downtown core (where the Seattle Waterfront Webcam and Pike Place Market are located). Walking south along one of the avenues (I suggest First Avenue) you’ll soon run into Pioneer Square, the historical district where the first settlers to Seattle set up camp.

Here is a pretty shot of Smith Tower (on the right), the oldest skyscraper in the city (completed in 1914) and which was the highest building west of the Mississippi until 1931. Interestingly, it was also the tallest building on the West Coast U.S. until the Space Needle eclipsed it in 1962. 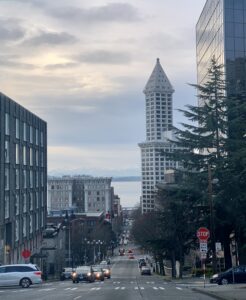 If you feel like a car adventure, then head out to Fishermen’s Terminal to see both commercial and pleasure boats vying for space in the packed marina. Lunch at Chinook’s or Little Chinook’s for fried fish and chips or salmon tacos is a must! 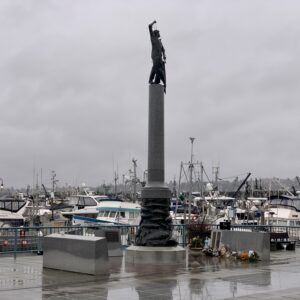 The Hiram M. Chittenden Ballard Locks–the largest locking system in the United States–are another popular spot for tourists and locals alike. It is fun to watch ships of all sorts ascend through the locks on the “boat ladder” and (inside the visitor center) watch salmon (in season) swim up the “fish ladder” in dramatic fashion. If you have time, you can take an Argosy Cruises boat tour that allows passengers to pass through the locks and experience the waters of Lake Washington and Lake Union. 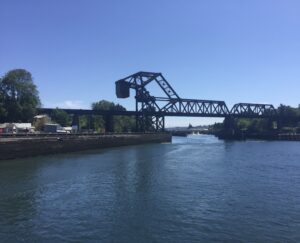 Volunteer Park offers many delights including the Volunteer Park Conservatory, the Seattle Asian Art Museum (SAAM), and this beautiful sculpture by Isamu Noguchi. “Black Sun” forms the perfect frame for another one of Seattle’s most famous icons, the Space Needle. 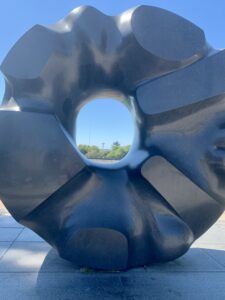 This shot of the Space Needle was taken from Elliott Bay Marina and Pier 81, with the Pier 86 Grain Terminal (the white columns) in the foreground. Nearby, the Smith Cove Cruise Terminal at Pier 91 is another place from which the cruise ships depart to and return from their voyages to Alaska. 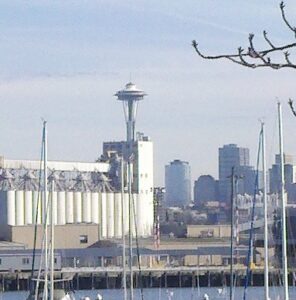 This photo depicts some of the lovely yachts floating in Elliott Bay Marina. 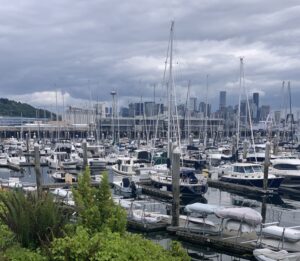 Wherever your wanderlust takes you, I hope you enjoy yourself in Seattle and environs!

Photos and text by Braiden Rex-Johnson.